One Arrested as Crowd in House Gallery Protests Voting Snafus 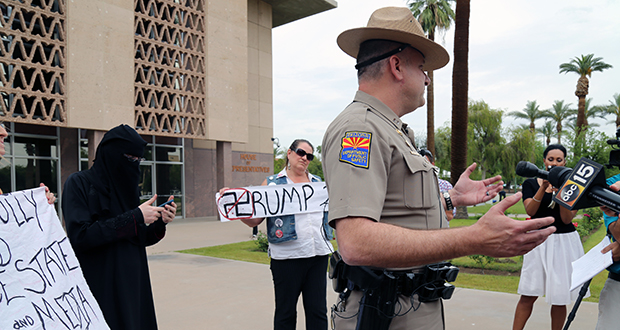 The trouble started as lawmakers began reciting the Pledge of Allegiance.

Adriana Espinoza, an activist sitting directly behind the main agitator, said a small group in unison added their own ending to the pledge by saying “in liberty and justice for some.”

She said that prompted security to start pointing out disruptive people.

Elizabeth Brown, a state Senate candidate who attended the hearing earlier, said one man was the most disruptive, chanting “re-vote,” but he left without incident when asked.

Espinoza and Brown said a security official pointed out a man in a Guy Fawkes mask and wearing dreadlocks as an agitator, but they said he sat quietly as the main agitator led chants. 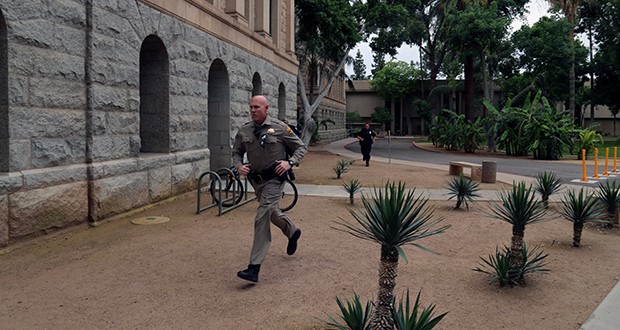 Officers run toward the House of Representatives on March 28, 2016, after chaos in the House gallery. (Photo by Gary Grado, Arizona Capitol Times)

Eventually DPS officers were able to pry him loose.

Department of Public Safety Captain Damon Cecil said the House’s Sergeant of Arms wanted the man in the mask to leave and asked troopers to remove him.

Cecil said he was yelling different slogans and was warned, but continued to be disruptive.

Cecil also said it’s the Sergeant at Arms who decides who should be removed. The man will be booked into Maricopa County jail on suspicion of resisting arrest and trespassing, Cecil said.

Cecil disagreed with witnesses who said the man wasn’t disruptive.

“If he was peaceful, why wouldn’t he just leave?” Cecil said.

No one was injured in the chaos.