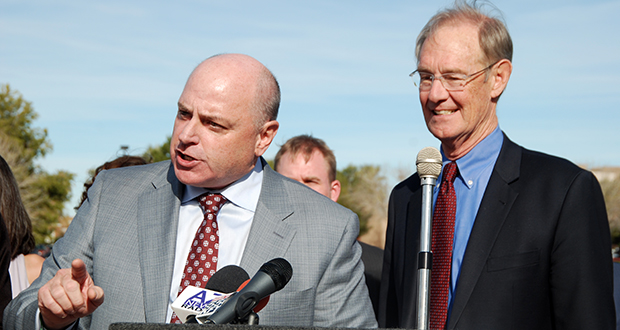 The Open and Honest Coalition announced the official kickoff for its campaign Thursday at Phoenix’s Margaret T. Hance Park. It must collect at least 225,963 valid signatures to get each of its proposed amendments to the Arizona Constitution on the 2016 ballot.

The coalition is the result of a merger between what were originally separate movements for the two measures. It filed two ballot measures and formed separate campaign committees for them, but plans on coordinating their efforts to the greatest extent possible.

Members of the coalition portrayed the two initiatives as working hand in hand, eliminating barriers that disenfranchise 1.2 million independent voters – the largest bloc of registered voters in Arizona – while corrupting elections with dark money, which topped $15 million in Arizona’s 2014 election.

“America remains today the greatest country on the face of the earth. I propose to you that it’s our two-party system, injected with the steroids of dark money that is broken, and it’s in jeopardy of destroying our American experiment,” said lobbyist and consultant Chuck Coughlin, a leader of the coalition whose firm is running the campaign.

Open and Honest Disclosure, the anti-dark money measure, would require disclosure of the “original source” of any contribution of more than $10,000 that is used to influence a candidate election in Arizona, from the city level up through the state and even including congressional elections. Essentially, its goal is to halt the common practice of federally designated nonprofit organizations, which are not required to disclose the source of money they spend on campaigns, from shielding the source of campaign contributions.

“Very small and very partisan primaries and a siege of dark money have made a profound difference in Arizona politics, a difference that we seek to change today,” said former Attorney General Terry Goddard, who spearheaded the dark money initiative. “I believe all Arizonans have a right to know who is behind every major political contribution. But that’s not been the case and it’s not the law in the state today. … I believe that we must now put our right to know into the Arizona Constitution.”

Coughlin compared the open primaries measure to the “sharing economy,” such as ride-hailing services like Uber, which Gov. Doug Ducey has championed since taking office.

“Recently, there’s been a great deal of public debate about our sharing economy. Our governor has encouraged our city to permit visitors to choose any cab or ride-sharing company they choose. If that system of open competition is good for consumers at the airport, think how productive it would be inpermitting voters to choose the very best candidate, regardless of party affiliation. Everyone competes on the same ballot,” Coughlin said.

The second measure, Open and Honest Elections, would create an “open primary” system, often known as a “top-two” system, in which all candidates for an office appear on the same primary election ballot, regardless of party affiliation. The election is open to all registered voters, and the top-two vote-getters advance to the general election. The measure would also equalize the signature requirements for all candidates to get their names on the ballot. Currently, independents, who appear only on general election ballots, not primary ballots, must collect far more signatures than Democrats, Republicans or members of other recognized parties.

Open and Honest Elections is a successor to a 2012 ballot measure that sought to create a top-two system. The measure, which was defeated by a two-to-one margin, was similar to the current proposal, but with some differences. The biggest difference between the 2012 and 2016 measures is that the new proposal would allow candidates to include their registered party affiliation on the ballot. State and county elections would remain partisan, while municipalities that hold nonpartisan elections would be able to continue to do so as well.

The 2012 version of the initiative allowed candidates to list any party affiliation they wanted, which was a major source of criticism from opponents. Maricopa County Attorney Bill Montgomery mocked the provision, saying candidates would be able to run for office on the Mickey Mouse Club or Donald Duck party.

Former Phoenix Mayor Paul Johnson, who ran the 2012 measure and initiated the push for the current initiative, said the biggest difference between Open and Honest Elections and its defeated predecessor of four years ago is the coalition the campaign has assembled.

John Opdycke, the president of Open Primaries, a national organization that promotes open primaries, said the campaign’s goal is to raise $13 million. He said Open Primaries has already contributed $1 million, which Opdycke said was given to the group by John Arnold, a Texas businessman and philanthropist.

Johnson and others vowed that they will publicly disclose the original source of all contributions to the campaign, including those from Open Primaries and contributors to a nonprofit organization that Johnson formed in late 2014 to assist his efforts.

“One hundred percent of what we have and what we’re going to do is going to be disclosed,” Johnson said. “Who’s funding the opposition? … You’re not going to find out.”

The Arizona Republican Party, a vociferous opponent of the 2012 top-two initiative, has already formed a committee to fight the 2016 iteration.