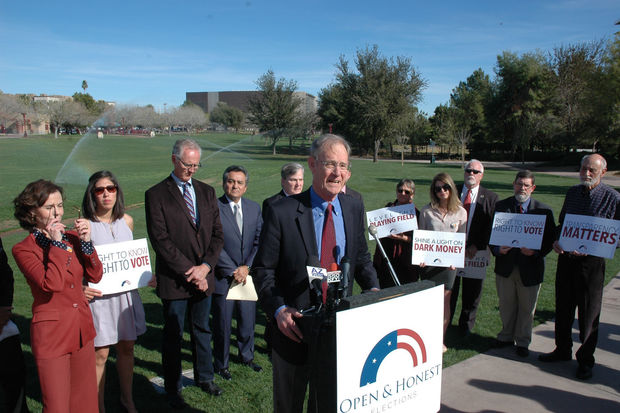 The more far-reaching proposal would require disclosure of any sources of “dark money” spent on candidate campaigns. Put simply, any source of funding of $10,000 or more, whether direct or donated through other groups, would have to be disclosed publicly.

That would effectively override existing gaps in the state’s campaign finance laws that allow groups incorporated as “social welfare” organizations to hide the true source of the dollars they are spending to influence who gets elected.

In the 2014 gubernatorial race, the $5 million spent on the general election directly by Republican Doug Ducey and Democrat Fred DuVal was eclipsed by the $9 million others spent trying to influence the race.

And two Republicans got elected to the Arizona Corporation Commission with $3 million spent by outside groups. Arizona Public Service, the state’s largest utility that is regulated by the commission, refuses to confirm or deny whether it was the source of any of that money.

“I believe all Arizonans have a right to know who is behind every major political contribution,” said former state Attorney General Terry Goddard.

That is not the case now, he said.

“As a result, perfectly legally, many forces came into the last election without disclosing who they were, without giving voters any idea who was the master behind the screen,” he said. “I believe that we must now put our right to know into the Arizona Constitution.”

Organizers need close to 260,000 valid signatures for each of the two separate measures by early July to qualify for the November ballot. Organizers said they have a combined budget of $13 million, with a $1 million pledge already in hand.

Opposition to the top-two primary measure already exists. The Arizona Republican Party has formed a campaign committee to collect donations to retain the current system, in which each party nominates its own candidates, and each party’s nominee then runs in the general election.

Less clear is who will take the lead in defending anonymous funding of campaigns. But some groups that have been involved in independent expenditure efforts are taking a closer look.

Garrick Taylor, spokesman for the Arizona Chamber of Commerce and Industry, said his organization is reviewing the measure’s language. But he said the chamber is generally opposed to any effort “to diminish the business community’s voice in the political process.”

Nothing in the measure, however, would block the chamber — or any group — from spending as much as it wants. All it would do is force whoever is spending money on elections to disclose any other group or individual who has given at least $10,000 to the effort.

But Taylor said the measure would effectively have the same result, with some donors choosing not to participate.